This cat is a genius. 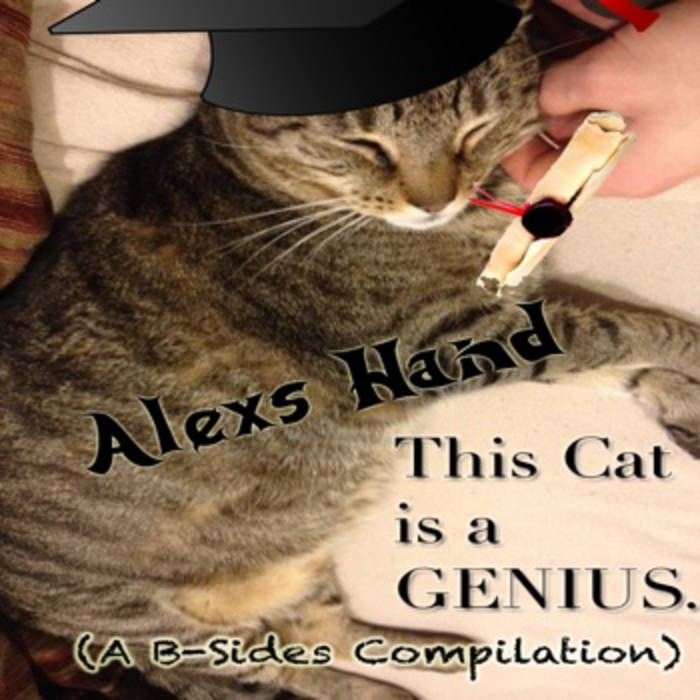 "Sometimes barrel scrapings are as much part of the meal as anything else from the barrel. In the brewing industry, that’s how you get sludgy yeast spreads like Marmite. Yum. Or not.

Meanwhile… we’ve met Alex’s Hand before. They’re yomping Seattle-ites from the scruffiest, carney-est end of American Gothic; something like a junior Primus, Zappa and Residents rolled into one, abruptly zombified, and crammed into the fustiest old suit in Abraham Lincoln’s trunk of hand-me-downs. This EP of B-sides (so they call them – they’ve only ever put out one EP) certainly seems like barrel scrapings. It’s mostly tarry, and it sticks to things. It’s shapeless, it’s distinctly umami, and you might not like it.

That, of course, is the point. Alex’s Hand tend to revel in everything they do, both their moments of genuine artistry and their dumbest chunks of musical blubber. ‘This Cat Is A Genius’ is a pre-release teaser of off-cuts from their debut album (‘Albatross Around The Neck’). It shows off (if that’s the right word) their sludgier leanings; their most precipitous rants; their Melvins side. It sounds as if while the goofy fuckers were messing around in rehearsal, some vicious bastard poisoned their coffee – but they enjoyed it so much that they sent out for more and left the tape running.

What the band’s actually doing is dealing with the departure of Slurrp, their ontime lead guitarist and horn-razzler. Drummer Nic Barnes and bass-bothering microphone pest Kellen Mills drop their stage-names, pick up the pieces and tumble onwards; various buddies help Kellen out with the guitar parts; but it’s clearly been a blow. You can all but hear Alex’s Hand bouncing off the ropes. However, they’re not ones to miss out on a dark chortle, even at their own expense. Nor are they scared of turning a setback into a challenge. If they have to have a period of floundering, they’re damn well going to get something out of it, even if they have to milk it ’til it bleeds. Rolling away from a relatively tight rock stance towards something doomier (or at least more rubbery), they’re taking the opportunity to map the underside of their development as they go.

One of the last two tracks from Slurrp’s last stand – ConserveNow! – is six-and-a-half near-atonal minutes of Melvins-style strain: a lurch-along instrumental of fuzzed grunge bass and wobbly guitar, like a sick freight train careening along a lost stretch of railway. The other, Ants, is a collapsing shack-load of wreckage-guitar and free-form word association. While Slurrp sifts through sluggish, raging clumps of feedback in the background, Kellen’s schizophrenic basslines jump and ebb between laid-back mooch and irritated attack. He also mutters beady-eyed, half-cut stuff into your ear – mostly about giants and UFOs, although at one point he does complain “words are stale, empty – they lack a certain sensuality.” Much of the ‘This Cat Is A Genius’ shares this playful pissed-off stance – a complaining laughter; clever-dumb; slumming in drunken despondency and enjoying a grump. Kellen plays the role of educated-and-unravelling to the hilt, offering flashes of self-mockery through the filter of booze vapours and the pinch of bad shoes.

Dear Me’s clench of lumbering punk disgruntlement mingles King Crimson feedback skitters with a collapsing, anti-play perversity. Inside itself, the song’s at war – halfway through, Kellen grabs a guitar and launches doggedly down a different tunnel and into a different tune. On the headache blunder of Train, he’s scouting for empty bars in order to avoid conversation, moping about insincerity like a touchy teenager: “wish I was happy listening to people with nothing to say. / Lying assholes with so much money / really are dead inside – / they pick my brains as they lie.” Longtime ally Ben Reece (of Step Daddy) drops in again to add wracked, protesting electric guitar and some needling ‘Marquee Moon’ edge as Kellen’s drunken soliloquy heads ever further downhill and then kinks back up shit creek, screaming about “blackest diamonds” and falling into the sea.

While the odd glancing zinger falls out of this kind of lyrical mess, Kellen’s verbal squalls and cracked mumbling are generally just another bit of colour. What he says is less important than how he says it; or just how the words hit the wall. Impression (featuring another temporary guitarist, Shadough Williams) sounds like a lobotomized David Byrne tripping over Black Sabbath. Nic drums on bottles while the music flinches between runaway bursts of samba and foot-dragging sludge-metal. Kellen dismisses another waster in smudges of sardonic detail: “he smokes his cigarettes, douses them with side-effects… / Stand to deliver, his parents used to say – / started out rich and pissed it all away.”

On Penticide, the band paddle around in a splatter of sprained, detuned instruments – piano, melodicas, glockenspiels – while Kellen’s rambling narration casts a cockeyed look downtown. Scribbling a vicious political cartoon of a “crack-whore free-market” full of hapless fools pushing “shit-stained zombie shopping carts”, he also rips himself and his peers ragged. “Welcome to the half-baked bistro… / conspiracy countdown coffee-shop collective,” he husks, before tagging himself as “a dying maverick with a bad attitude… / like Merce Cunningham took a shit in a wine glass.” Mocking his trashed, anti-heroic slide from high culture to garbage, the band break into sarcastic applause.

Confounding all this sarcasm, the final moments come close to delicacy. Sad Little Skeletons is slender, thoughtful and melancholy; initially, it’s not much more than distant birdsong and overheard chat, accompanied by lonely bass melody and shavings of rhythm guitar. For once, Kellen sings gently, setting aside the drunken howls and the scatter-shot smartarsery. Clarity renders his conclusions even bleaker. “Thoughts will come / then fly away. / These emotions are so thick, / like this life just makes me sick. / These piddly little humans, driving their cars / on the freeway… / Sad little skeletons; broken, but don’t realize they’re lost.” The rise towards a tangled noisy fanfare and the drowning of the words in yell and distortion initially comes as a relief. Then you go back and listen to it again, hearing the weary breathing and the tiredness that smacks of reality.

Part-broken, smeared, and devilled by little gouts of waspishness, this isn’t the easiest collection of songs and slurs to get along with. But there’s plenty to scoop out anyway, especially if you like hearing the wilful awkwardness of a band who enjoy stretching themselves out of shape and balance, and who can fit that in with the big boots and barfly lunges. If you enjoy feeling as if you’ve been dipped in an uncomfortable goo, that’s a bonus."
Dann Chinn
Misfit City UK